Shared experiences for book lovers despite the distance, the Book Club is an added feature for the Amazon Kindle app that allows up to 4 users to share annotations. 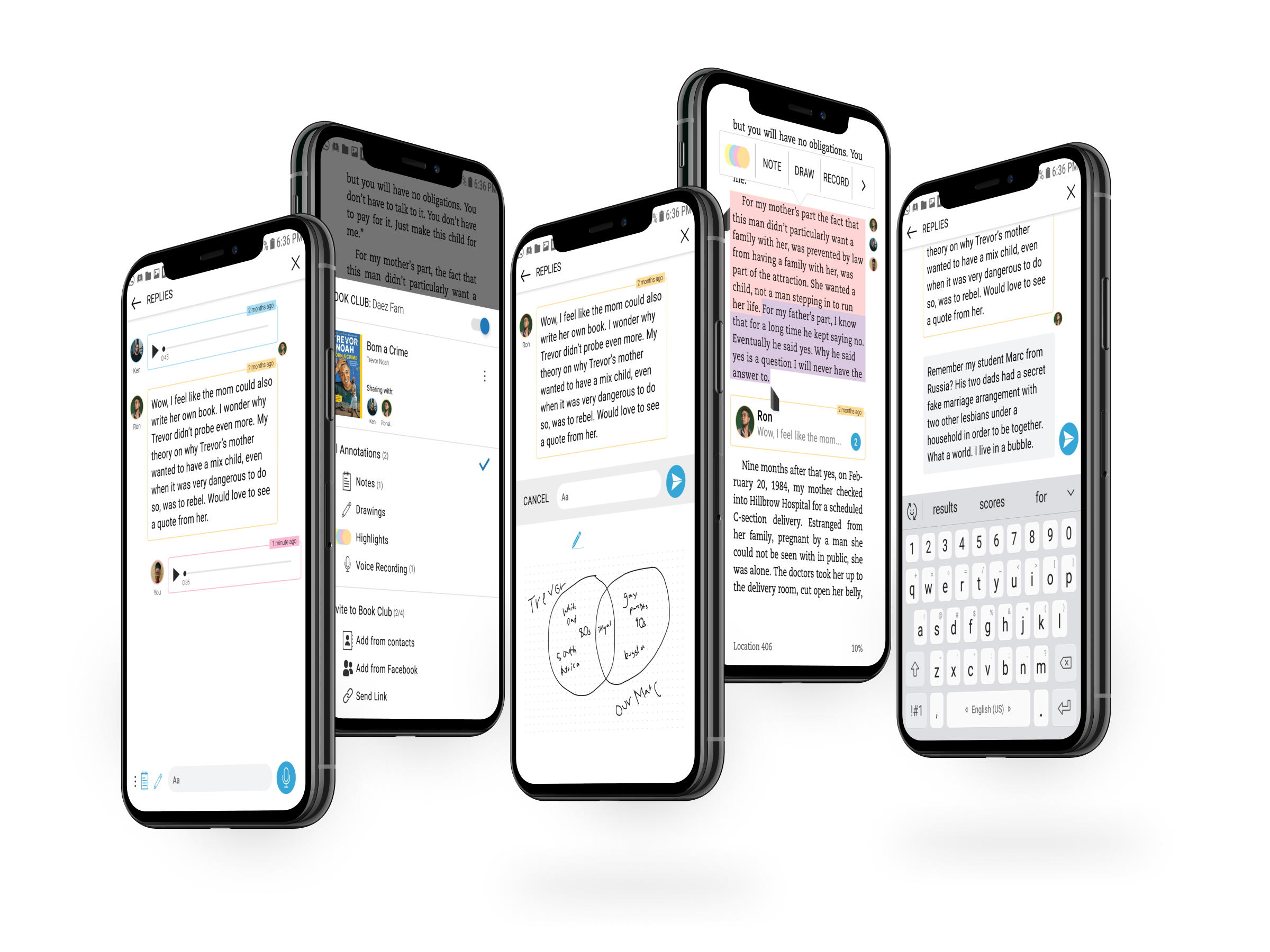 Online games like Jackbox and virtual dance parties like Steezy Studio have risen in popularity because of COVID19. Kindle Book Club Feature is an add-in feature that taps into the same idea of virtual closeness.

Project Brief
Because of COID, people are encouraged to social distance and find new activities. Likewise, people may not see loved ones because of travel restrictions. The main focus of this project is to add a feature to the Kindle Reading app that will enhance the reading experience by allowing two to four users to virtually share the book and allow the users to leave annotations, drawings, or voice recordings. This feature is preferred on the mobile and tablet, but will also be available for the web app.

Business Goal
‍Recruit new users to download the Amazon Kindle App who are invited to the virtual book club.

High-Level Goals
1. Add a feature where up to 4 users can share a book
2. Build the feature that allows annotations, drawing, and voice recording capabilities
3. Create the user experience and UI patterns that is similar to other platforms that have a sharing and recording capability
4. Create for the Android phone

How can Kindle allow readers to virtually share a book together, share thoughts about the book they are reading, and create virtual book clubs?

To understand the problem statement more, first I focused on research the market of what is currently available to users in terms of reading applications and understanding users' reading habits.

From the market research, I learned that the Kindle is a highly desirable product with high value, but there is currently no sharing annotation capability even there is already a built-in annotation feature. Thus, I conducted a customer interview and a survey to assess if there are any interest in this add-in feature. 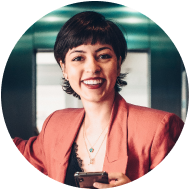 "It's also really important to me because when I travel, I want to be able to switch back and forth between a lot of different book." Suzie, Missouri, Pharmacy Student 27 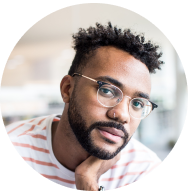 "Annotation in general is underrated. It's something even at my company that annoys me that we don't do because there's a historical institutional knowledge built around certain documents, but they keep all the documents clean." Peter, Washington, DC, Proposal Writer, 29 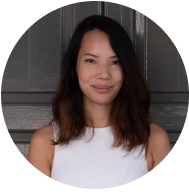 "I go through periods where I don't use it for a while and then I forget how to use it and then I have to reteach myself." Jacquelyne, California, Youth Advocate Against Drugs, 25 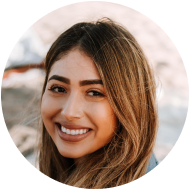 "I love that the different highlighting options that you can use and it's not just one particular color. And it's really easy to highlight." Joy, California, Teacher 30

57.1% of participants say they have never wanted to share highlights or notes with someone else on the e-reader.

65% of participants do not highlight or take notes on the e-reader.

80% of participants were satisfied with the e-reader.

After having a good understanding of the problem, next I will think about the users who will use the add-in feature, how the feature will fit into the existing architecture, and the user task.

After understanding the market and the potential users, I next focus on UX Strategy by creating the persona, sitemap, and task flow.

Meet Booklover Bonnie
After I learned more about how users are reading digitally, I created the persona, Booklover Bonnie to embody the primary user. She is a young professional who enjoys reading as a form of self-care. She juggles different books from fantasy to professional development to mystery thrillers. She has an informal book club with her two brothers via a group text. . 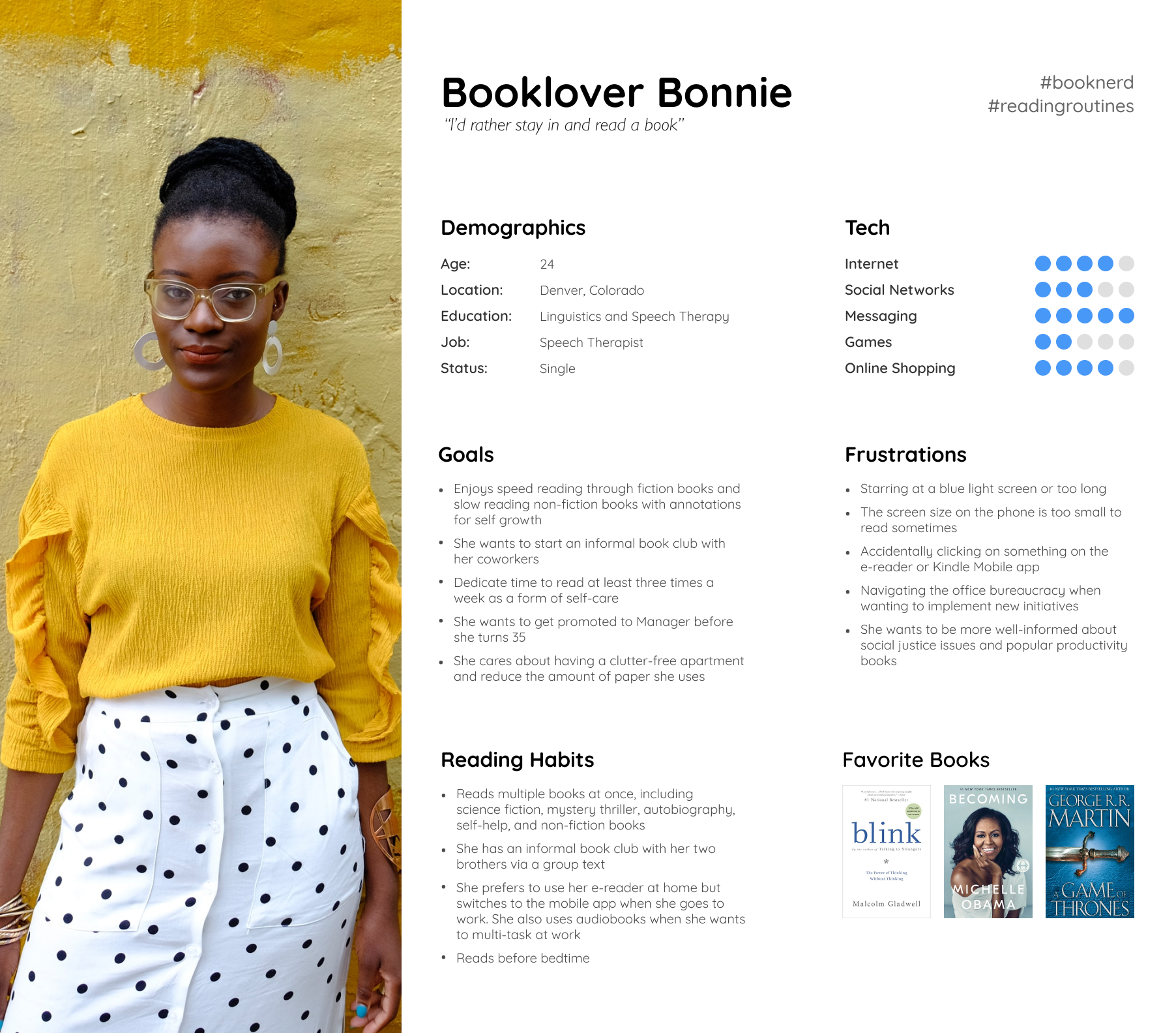 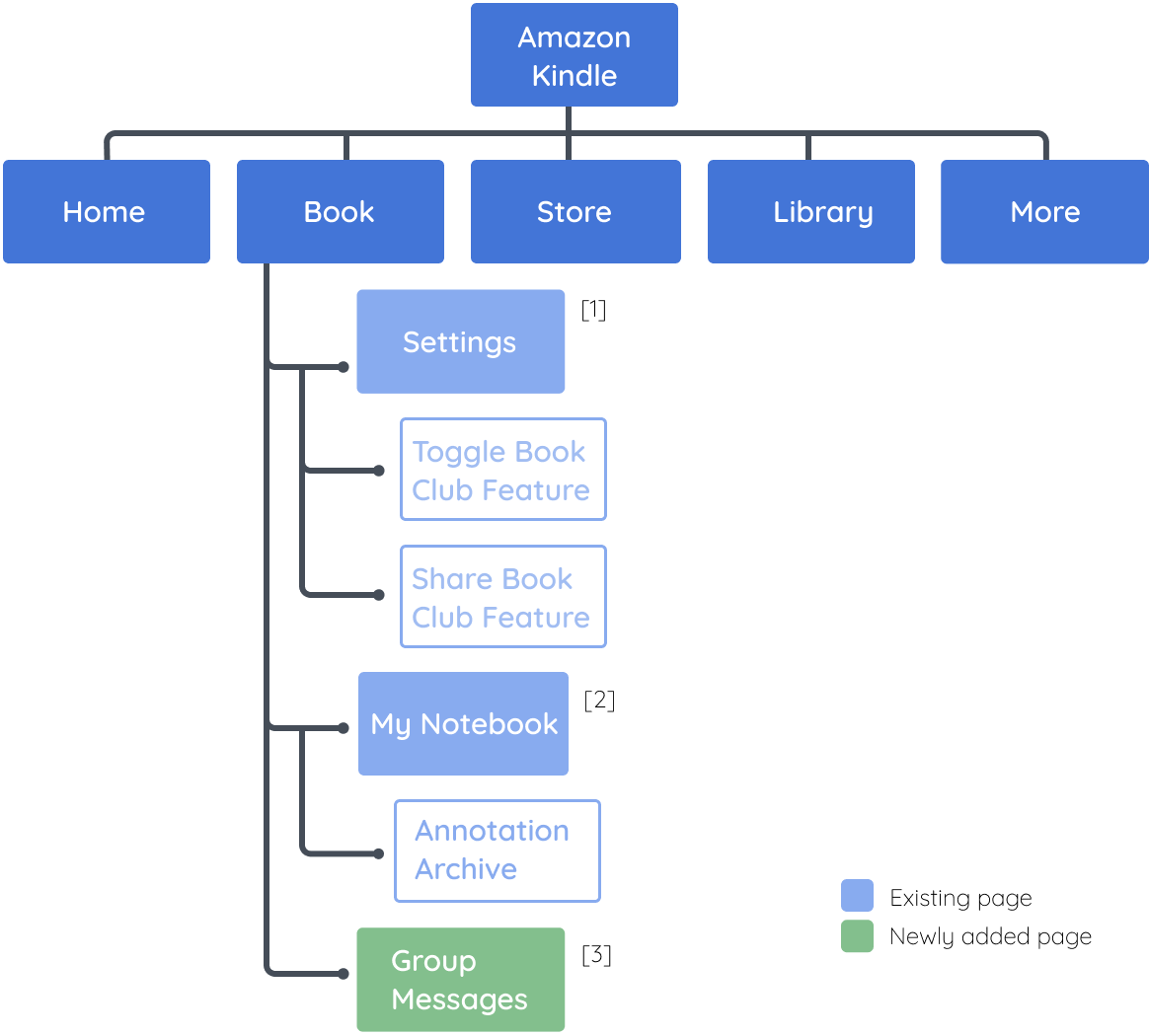 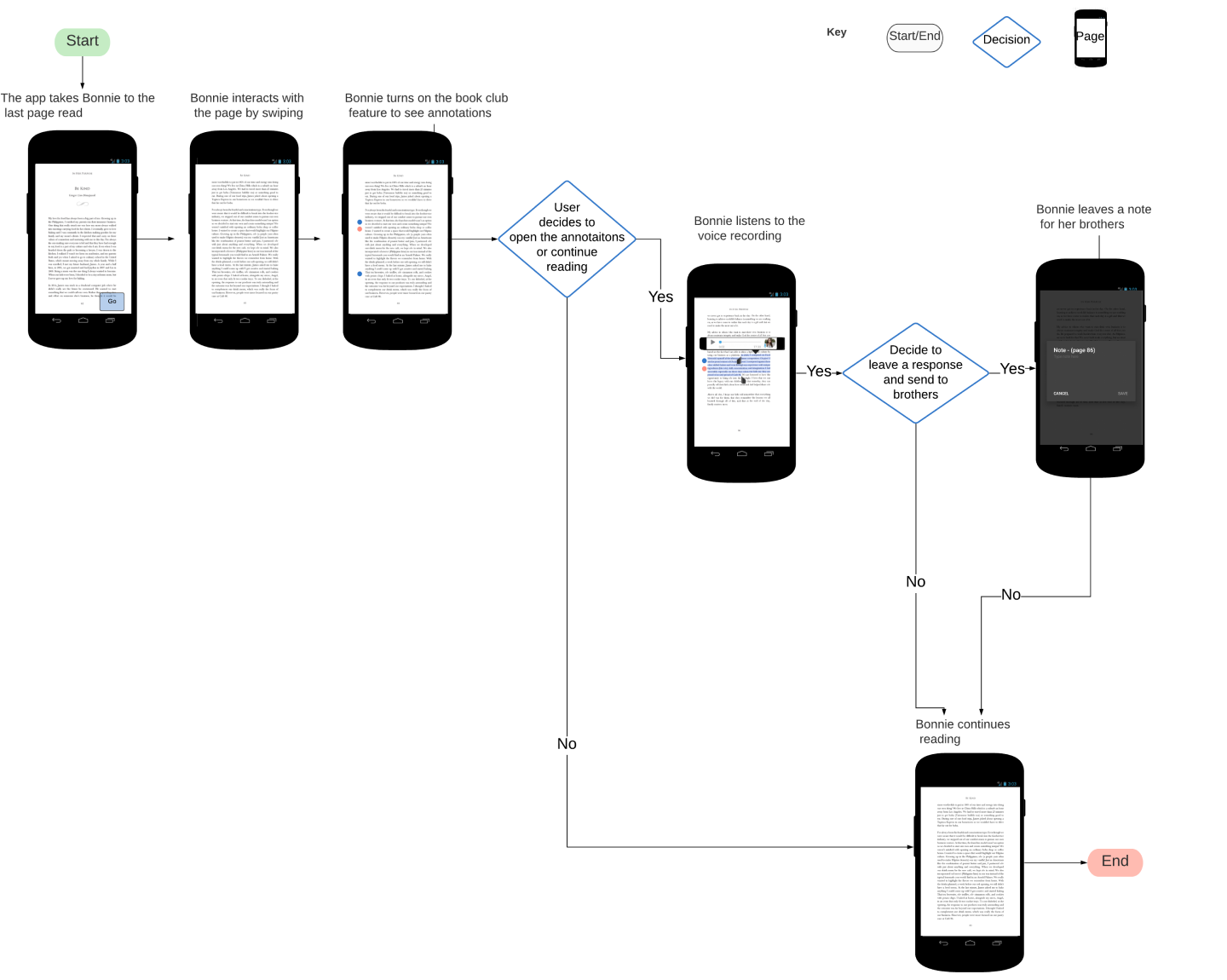 Designing based on UX Strategy

With the persona and how the information architecture will be organized, next I think about layouts and interactions that will exist within the virtual book club. 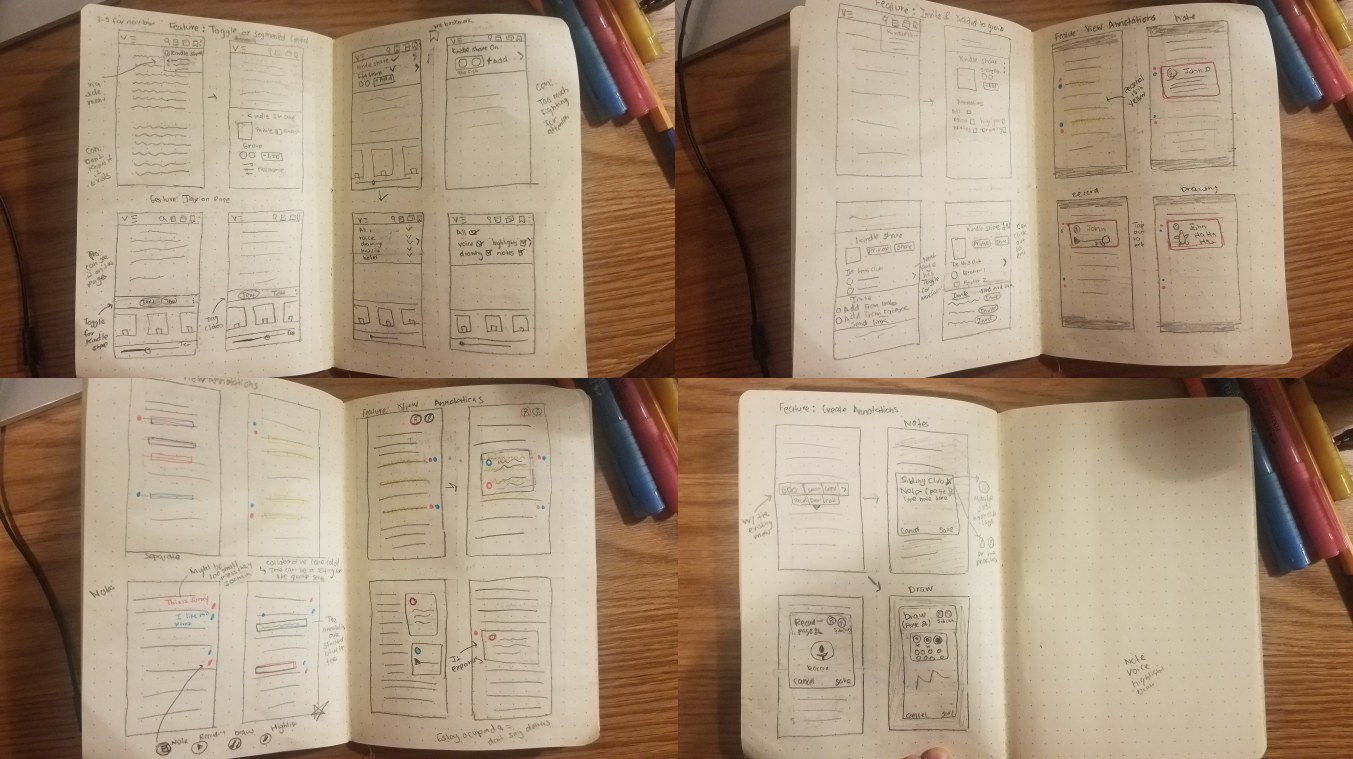 Mid-fi Wireframes
After exploring different layout patterns, I focused on details and gesture interactions by creating the mid-fidelity wireframes. Pre-existing gestures that I had to consider were: 1) pressing down on the screen to add a highlight or note, 2) double tap to access the menu. For my mid-fidelity wireframes, I mimic similar annotation display that one would make on a physical book to allow the user to immediately understand the meaning of this new add-in feature. 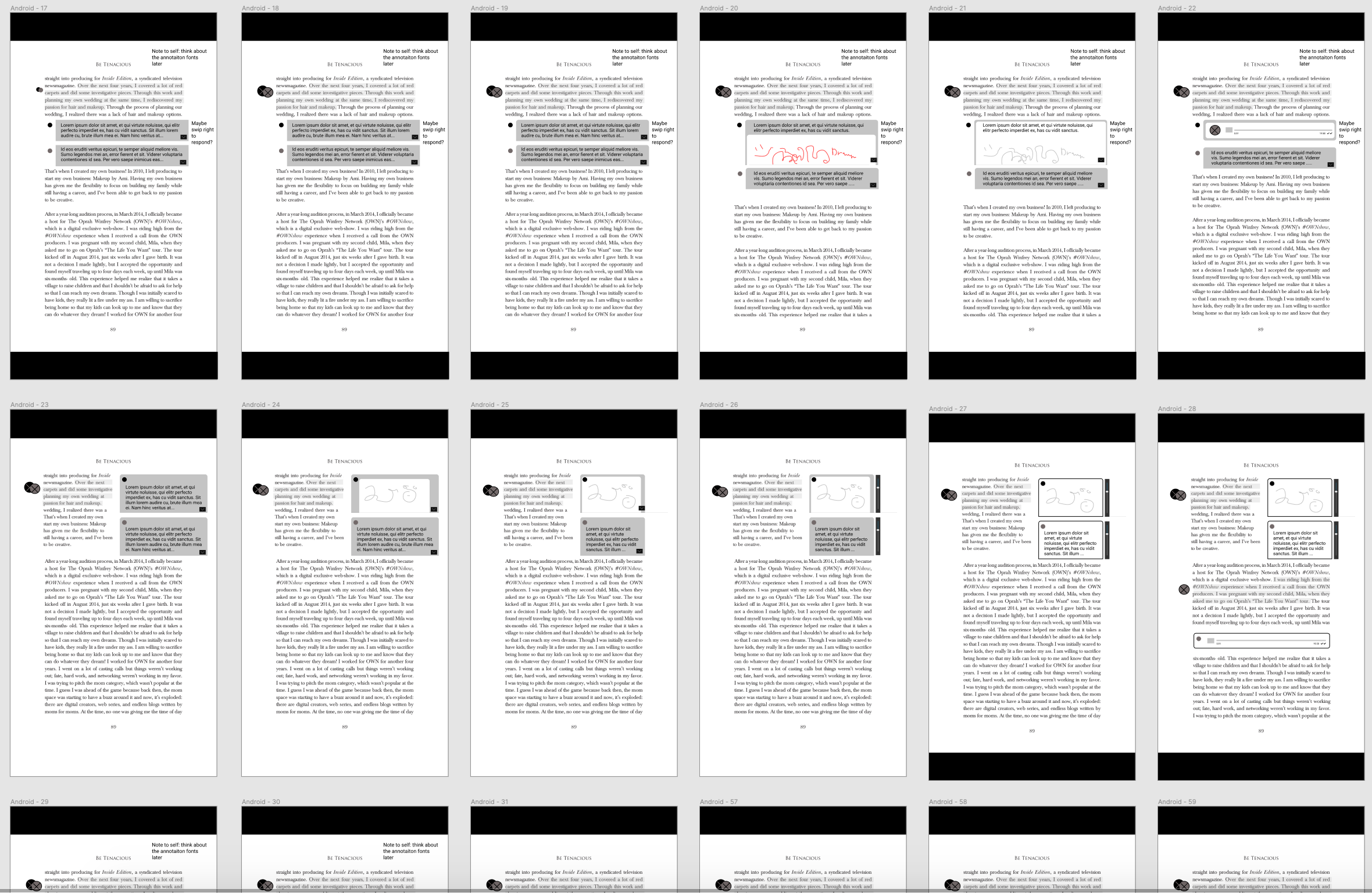 After exploring potential layout and design patterns from my low-fidelity and middle-fidelity wireframes, next I will look at the existing UI kit to ensure the add-in feature stays on brand.

Next in the process, I create the UI kit to help review whether all the add-in icons are on brand with the Amazon Kindle.

Creating icons that stay on brand
I took inventory of Amazon Kindle's existing UI to guide the UI designs of the add-in feature. 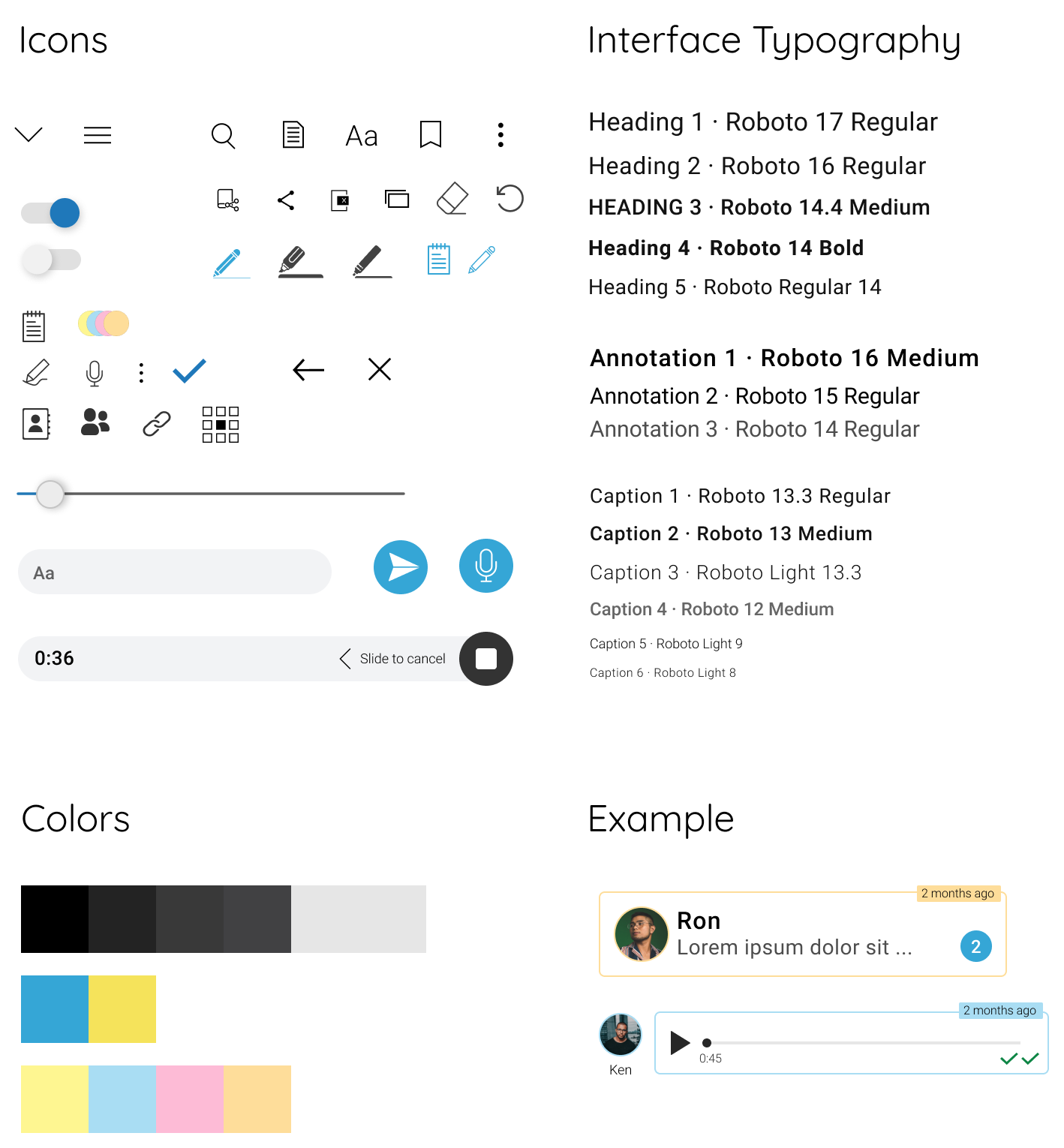 Preparing for the usability test

After solidifying the UI design guidelines to follow, next I will iterate for the high-fidelity wireframes that I will use for the usability test.

High-Fi Wireframes for the Usability Test
After finalizing the style tile, I iterated and prepared high-fi wireframe for the usability test to validate the designs of the add-in feature. I prepared frames for 3 different tasks: 1) turn on the virtual book club through the settings, 2) interact with the annotations, and 3) leave an annotation with the option of using voice recording, notes, and drawing.

Task 1: Go through the pages as if you are in a virtual book club with two of your closet family members or friends. On the second page, turn on the Kindle Share feature and find the settings menu. 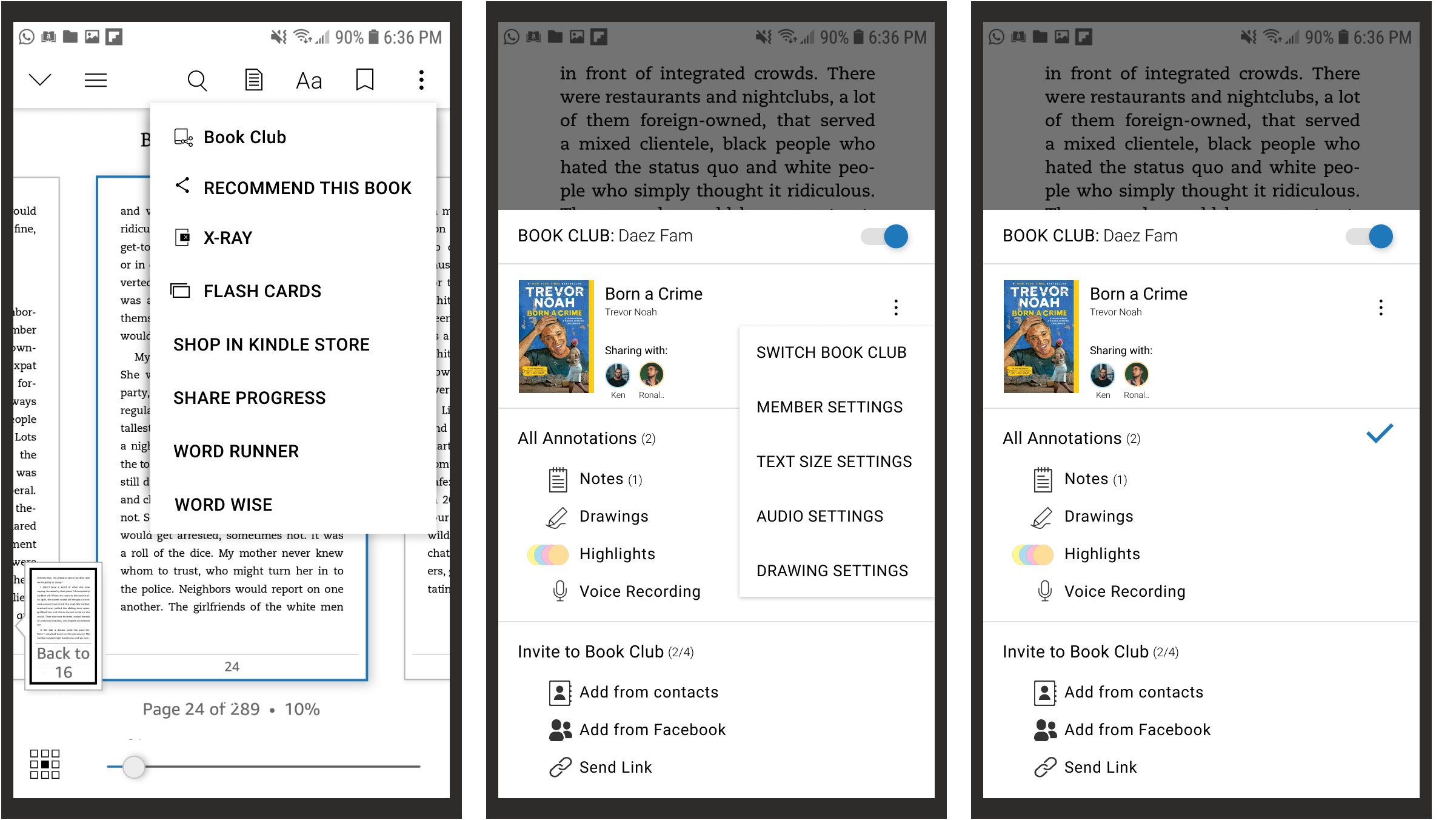 Task 2: Interact with an annotation 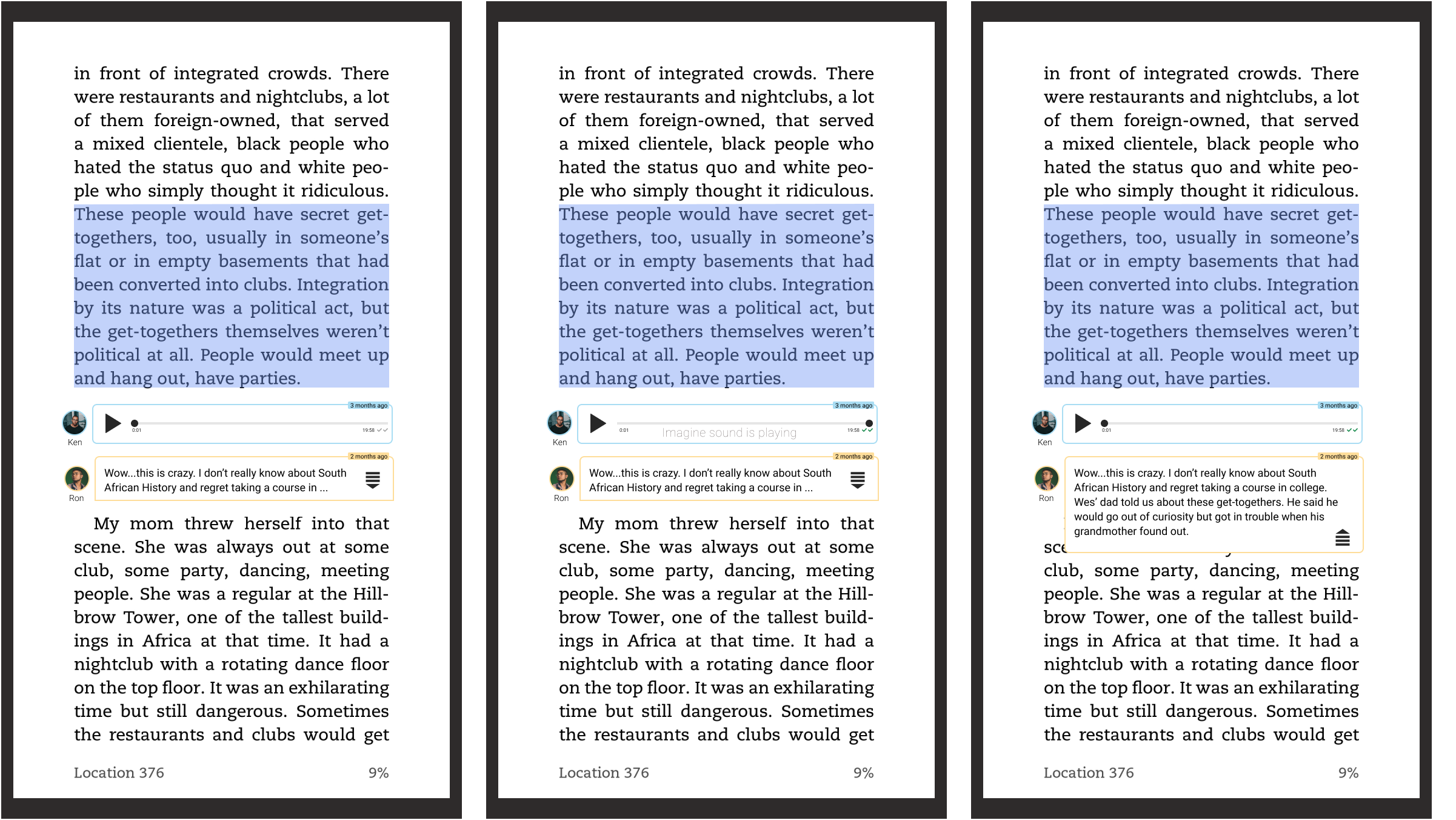 Task 3: Leave an annotation on the last page (location 399). Option for notes, drawing, and voice recording. 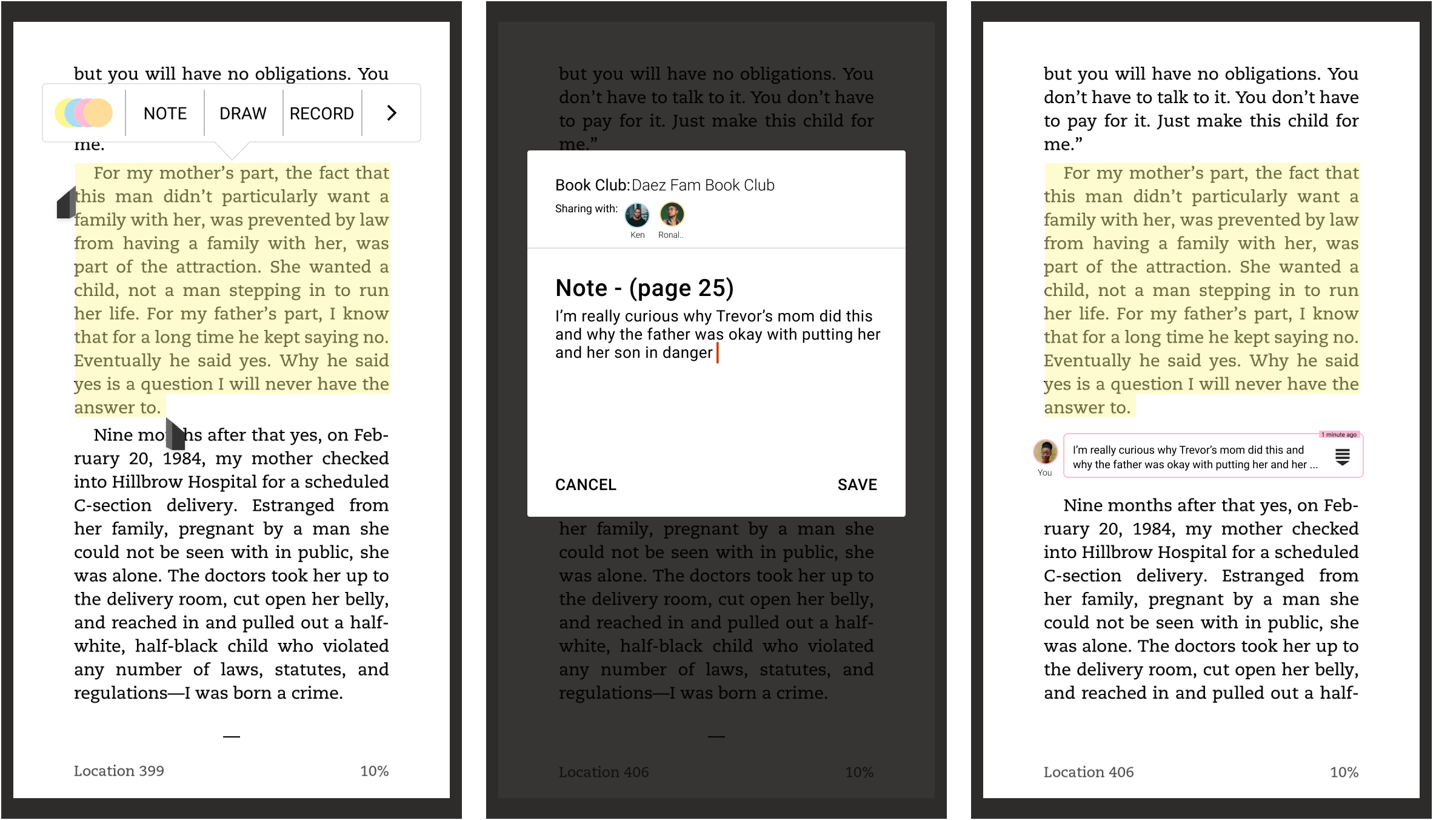 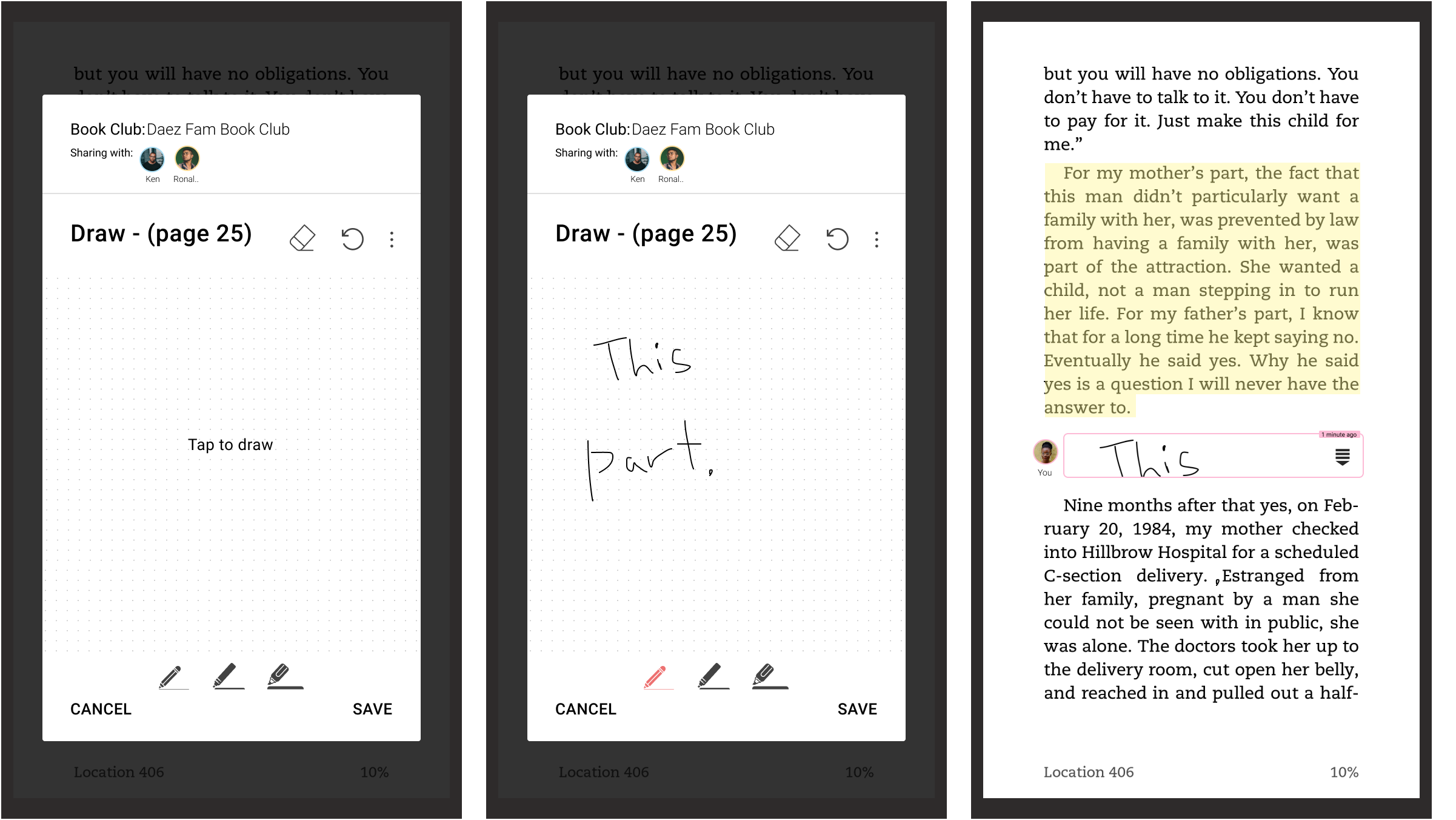 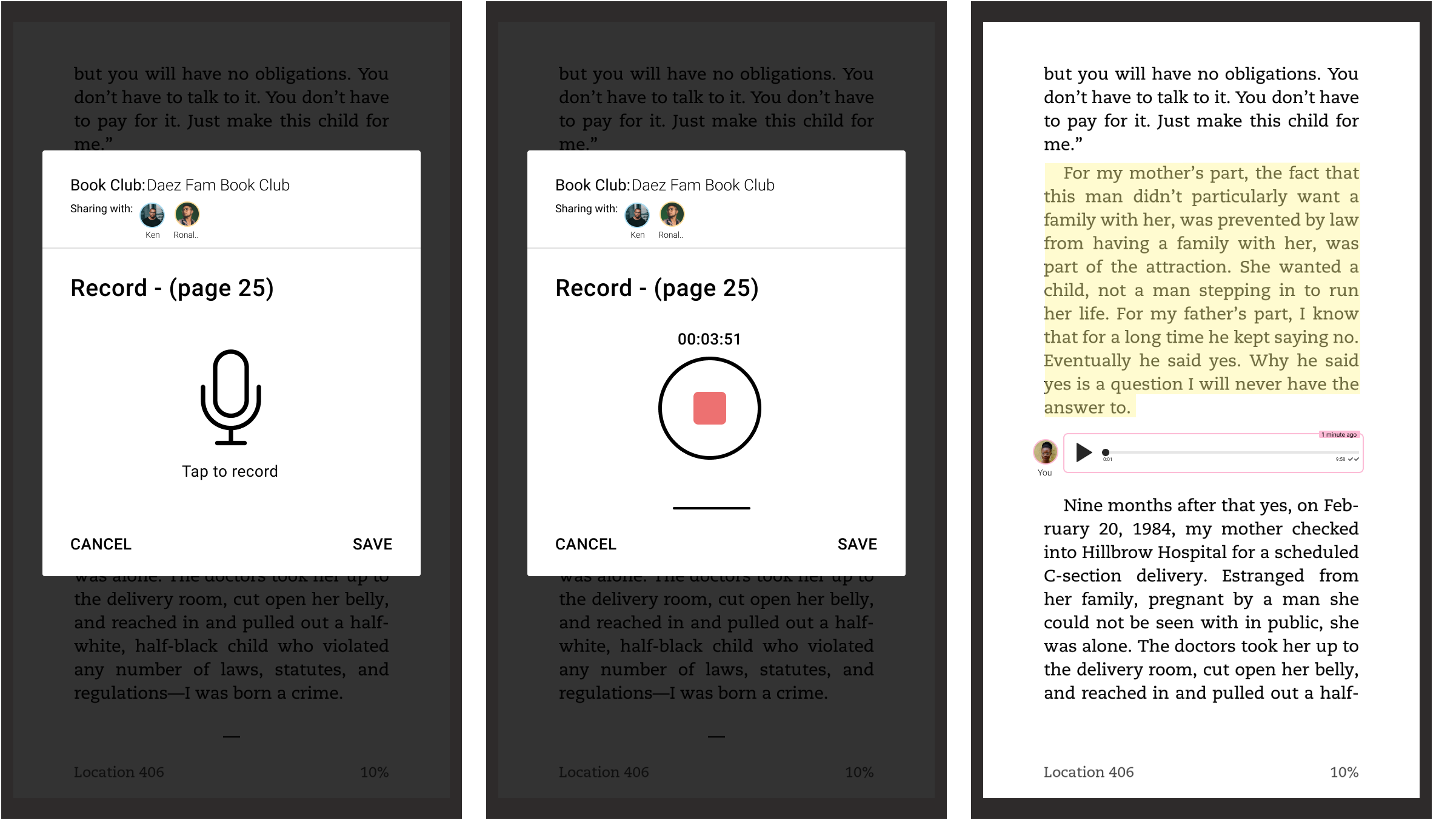 In the next process, I will test my high-fidelity wireframes to determine the usability, desirability, value, and adoptability.

During my user research, there was low interest for a sharing capability on the Kindle. This usability test will not only test the usability but it will assess whether the participants have any desire with the add-in feature, if they find it valuable, and if they find it intuitive to learn.

Validating designs through a user test
Next I use the software Maze to conduct a usability testing to see whether users can intuitively turn on the add-in feature interact with an annotation, and leave an annotation with the current designs. 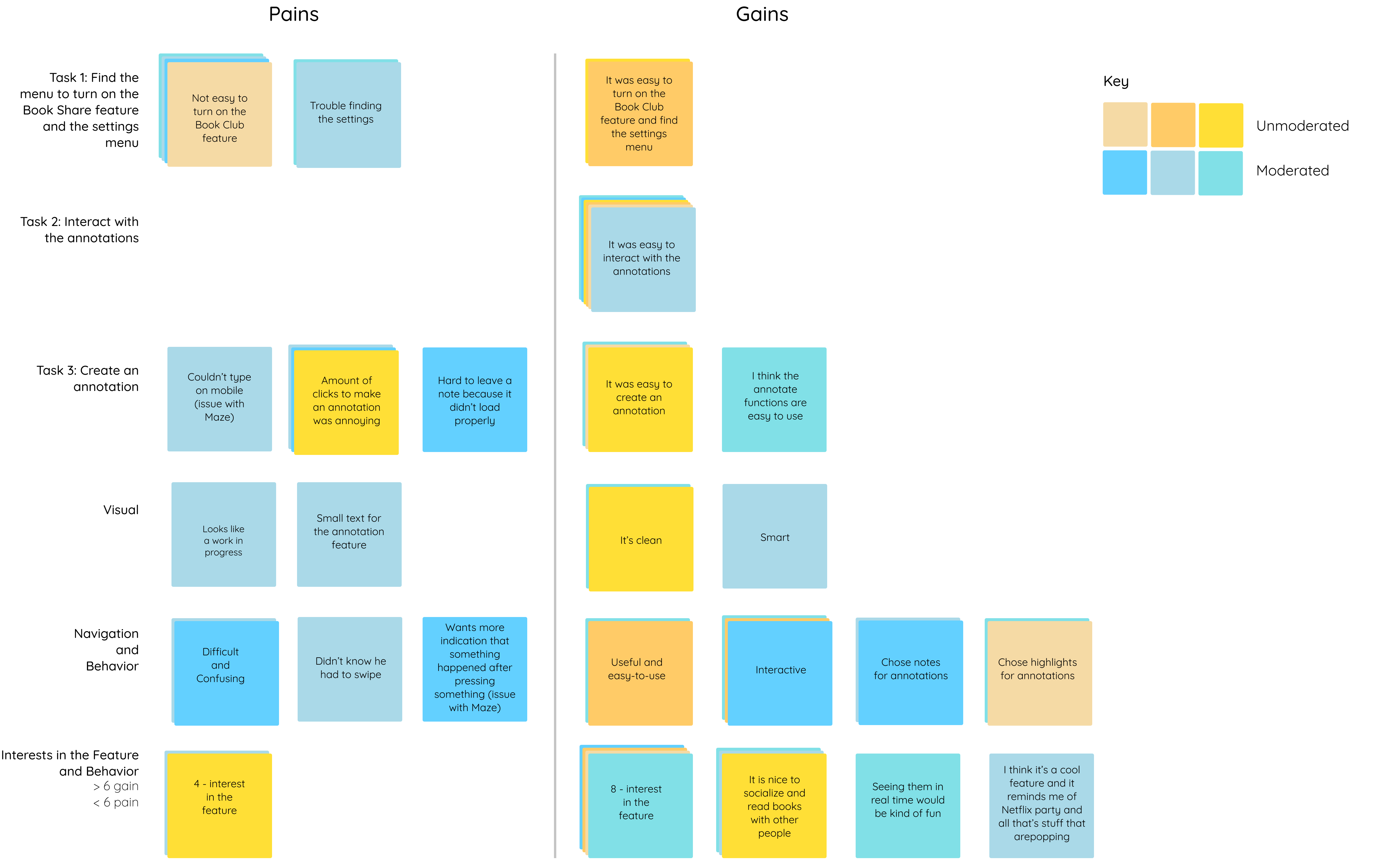 Because pain point 1 and pain point 2 relate more to Amazon Kindle's set of existing gestures and navigational information architecture, I had less control of fixing these issues. Instead I focused on pain point 3. For my priority revision, I made it easier to use the add-in feature by reducing the number of steps to leave leave an interaction.

Replying to other annotations:

For the priority revisions I solved this by creating a group message interface where the user only uses 2 steps to leave an annotation: click on recent unread message and hold pressing down slide to record. This design also solves the problem of displaying multiple messages and limiting the virtual book club members to 4 users since this annotation style can consolidates messages and take up less space on the screen.

Priority Revisions: When user is first to leave an annotation
Before. when the user wants to create an annotation, I used the existing UI patterns where the user took 4 steps: use hand gestures to highlight, click on note, type in note, and then user press save.

Leave an annotation for the first time:

When the user is the first in the virtual book club to leave an annotation, it took 4 steps: use hand gestures to highlight, click on note, type in note, and then user press save. There is too many friction to leave an annotation which may deter the user from using this add-in feature. For this priority revision, it allowed me to see that it takes many steps for users to see their personal annotations where after the 4 steps to leave an annotation, the user needs to double tap to open the menu, then click on the "My Notebook" icon to see the archived annotations which adds up to 6 steps. This gives insight that more user interviews should be conducted if this is a frustrating aspect of the kindle application.

Reflection and Next Steps

How to improve the add-in Kindle Book Club feature in the future?

Below is the final prototype with the responsive design for mobile.

Reflections and Next Steps: